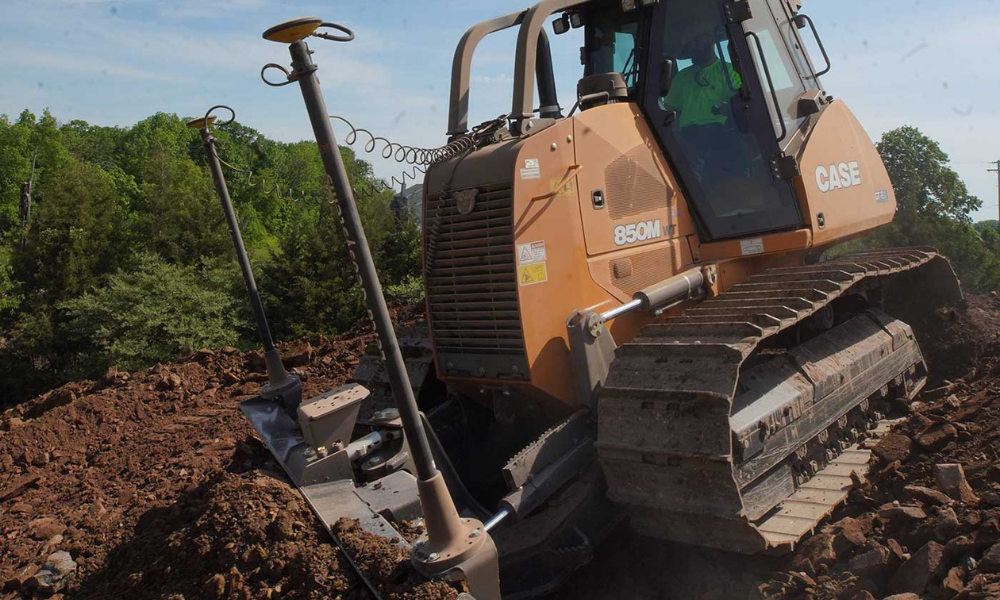 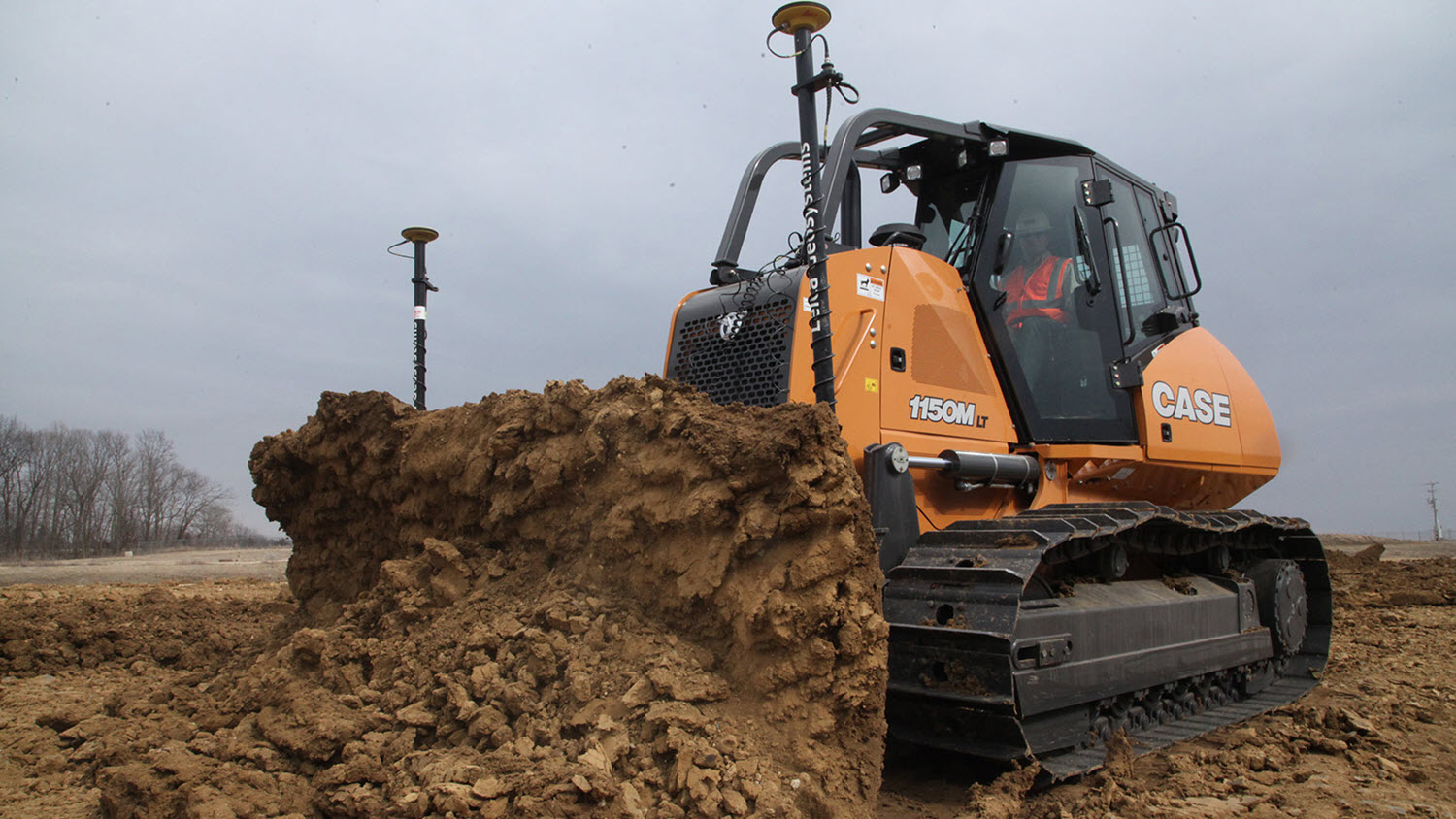 As the third generation in his family’s construction business, Corey Metts grew up on the seat of a dozer pushing and pulling levers.

“There are not many jobs where you wake every morning and get to go play with tractors. It’s really the only thing I’ve ever known.”

Metts Construction, out of Chapin, South Carolina, operates in the Midlands area of the state. “We’re a clearing and grading contractor. Most of our work is for custom home builders and design/build general contractors.”

The work for Metts ranges from single-family homes up to larger commercial developments that span numerous acres. One of the company’s most recent projects involved grading, installing storm drains and paving the parking lot for a two-acre pediatric clinic outside Chapin. Like many contractors today, Metts is faced with the reality of trying to get more done in tighter windows — and while his jobsites don’t look like the expansive and complicated earthmoving operations advertised with most machine control systems, his operation has benefited from the implementation of a dual GPS system matched with a mid-size production class CASE dozer to essentially eliminate the need for a second finishing dozer on his jobsites.

“[It now only takes] one operator to do what those two machines could do,” says Metts. “We’ve been substantially more efficient with all of our grading activities and been able to take on more projects just by cutting down time that we invested in grading.”

Each dozer in his previous fleet outlay had a specific role, which the 1150M has replaced due to the power and performance of a newer model matched with the efficiencies achieved by machine control.

“Typically, on a project like this, the 1850 would spend probably two weeks pushing dirt, getting everything rough graded, and then we have our 850 to do the finish work,” says Metts. “Now with just one machine we can have one operator do it all in half the time. On a site like this–you’ve got half the labor, half of the cost in getting the equipment to the site and away. It’s much safer just having one machine as opposed to two.”

So much of a machine’s long-term value is determined by its utilization and its ability to perform work in an efficient manner (greater billability/lower operating costs). Metts is seeing that achieved with his current setup.

“Once we come in and do the clearing, we immediately put the dozer to work, stripping the top soil, building the retention pond. It’s used as much, if not more, than any other machine on the site just because of the capabilities and not having to stake anything. We use it for curb grade and we don’t have a surveyor come in until after everything is graded. We’re able to cut out a lot of time. No more pulling strings in the parking lot. It’s cutting the cost of our dirt moving to a point to where we can afford to take a little extra time with a smaller machine if necessary.”

And while the 1150M represents a compromise between the two size classes of Metts’ previous dozers, the company reports that its operating efficiencies gained from lower engine displacement, while retaining strong torque and pushing power thanks to an exclusive hydraulic management system and Tier 4 technology, resemble that of the smaller of the two dozers it replaced.

“The fuel efficiency for this machine is comparable to our older 850K model. We are getting a lot more production for our fuel because of the upgraded Tier 4 engines.”

“This 1150M is the first piece of equipment that we’ve bought with machine control,” says Metts. “We were at a point we couldn’t compete without [it]. Now we’re competitive with anyone else in the area for moving dirt. If we go to a small project, it cuts down a lot of time, nearly eliminating re-work.  We aren’t moving dirt several times. We can cut it one time and be finished with an area on the project. That was really the big selling point.”

The Leica Geosystems iGD4SP-3D system with a dual GPS allows for fast and efficient grading with excellent accuracy.

“It has the touch screen controller inside, a base station setup on a pole that we mount elsewhere, and we also have a rover to complete whatever staking I need to outside of using the dozer. The dual GPS is much more accurate than any of the laser type control systems that we’ve used. It follows every contour, most everything we do on the site. We don’t have to go back and recheck it. We grade it one time and move onto the next phase.”

The real benefits of the machine control system are made obvious when accounting for the efficiencies it provides at the end of a job. The goal is to move dirt as few times as possible while putting minimal wear and tear on a machine.

“There’s always dirt that is going to be moved several times on a job site,” says Metts. “If you can cut it down to moving it once or twice as opposed to four or five times then you’re saving fuel, labor, and the insurance costs. The machine control has cut our costs for labor, rework times, our fuel costs, and it’s improved our efficiency to where we can take on 20 percent more work in the year. To anyone that does not have machine control on at least one dozer, you can’t afford not to.”

One of the reasons that contractors today may have not yet adopted machine control is a fear of a complicated learning curve or setup. Metts reports that it has helped him improve the overall skill and productivity of his operators without being too difficult to learn.

“When we first implemented the system … we spent more time putting parts on the machine than it took to learn to run it. The first guy I put on the dozer for training was a young laborer, 22-years old, who had never been on a bulldozer before. Within an hour I had him grading for curb on a project. It’s as simple as it can be. I feel like just about anybody could be trained to be an efficient grader within an hour. We no longer have to have several grade foremen or qualified people to be running the grade control. Even a young laborer can come in and grade a parking lot just as well as anyone else. We’re still picking up little tips and tricks here and there, but we we’re pretty efficient with it.”

Another feature of the new setup that has impressed Metts is the 1150M’s ability set blade sensitivity, steering sensitivity and shuttle sensitivity to smooth, moderate or aggressive. This allows the operator to adjust machine responsiveness and controls to their preferences and ground conditions.

“It took some getting used to–the ability to change the sensitivity and speed of the steering and also to be able to turn the blade control to the fine grade mode,” says Metts. “It slows the hydraulic flows down. That was a major help even before we implemented the machine control. The blade control for the dozer does have the ability without the machine control turned on to reduce the flow and slow down the function, so that you don’t jerk the blade up and down.  It smooths everything out for you.”

The 1150M features a new cab-forward design with floor-to-ceiling glass doors to provide industry-leading visibility down to the blade. A sloped hood and the position of the operator in the cab provide excellent visibility to the ground in front of the machine. CASE engineers targeted operators of all sizes with a seating position that would allow the ability to see the toe and heel of the blade, while also seeing up to 6 inches behind the blade for grade quality, as well as a good view of the horizon versus their blade.

“Visibility is great inside the cab,” says Metts. “The large glass doors–you’re able to see around 18 inches of the end of the blade on both sides. Something that even our older machines with an open cab was a feat. Visibility is very important because of our close quarters work, we grade right up to buildings and you have to be able to see every little thing around them. We certainly don’t want to be knocking down any buildings.”

The 1150M also features a sealed and pressurized cab that helps keep dust and other materials out of the operating environment. Noise is significantly reduced over previous generations by both the cab as well as a new vibration tuned undercarriage system, helping to reduce operator fatigue.

“The operator station is extremely comfortable–the air ride seat, everything ergonomically just seems to fit very well. This is the first enclosed cab dozer that we have owned. I don’t think we’ll ever go back to an open cab.”

Finding Support from the Dealer and OEM

When it came time to support Metts as his company transitioned to the new dozer with machine control, Hills Machinery out of Columbia, South Carolina was uniquely qualified to support the deployment as the dealer is a CASE SiteControl-certified precision solutions dealer.

“The sales department has been great, the parts department is great, we just didn’t feel like there was any need to gamble on another brand. One thing that we had experienced with Hills Machinery as opposed to other dealers is when we make a call they answer. They will take the time to work with us and figure out issues that we have or what we can do to be more efficient on the job, and the right solutions for us.”

The 1150M with machine control is further supported by CASE and Hills through its ProCare offering, a suite of product assurances that include a three-year Advanced CASE SiteWatch telematics subscription, a three-year/3,000-hour full-machine limited factory warranty, and a three-year/3,000-hour planned maintenance contract. ProCare allows contractors to invest in new equipment while making owning and operating costs predictable for the first three years of ownership.

“The maintenance cost has been virtually nonexistent,” concludes Metts.