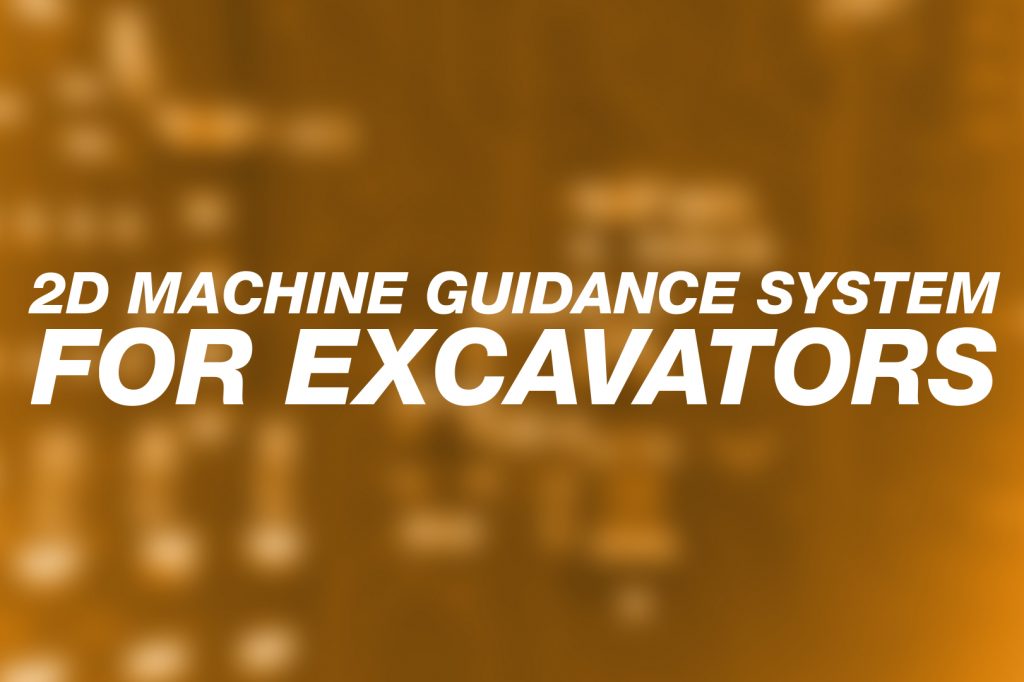 Making the Grade: The Benefits of 2D Machine Guidance and Control Systems 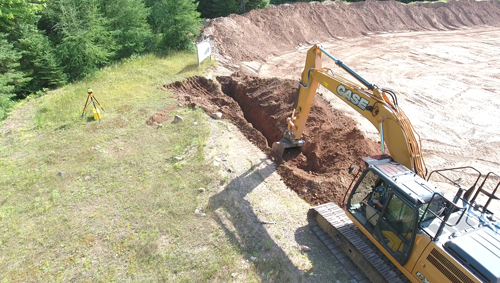 When it comes to machine guidance and control technologies, most people think of large site prep and road building projects – but it’s not just for large dirt-moving applications. Whether it’s flatwork prep, trenching, foundation work or underwater dredging, a 2D precision solution can have an immediate impact on a contractor’s bottom line.

When discussing 2D machine guidance or control, it is first important to understand that 2D systems can involve a few different setups and operational considerations. Here is a quick review of those systems:

Slope control – Slope is controlled by sensors mounted on the blade and the control panel in the cab.

Single laser with slope – A tripod-mounted laser works with a single machine mounted laser receiver to indicate or control elevation. Slope is controlled by the operator, or by a sensor that adjusts cross slope.

Sonic – A sonic receiver uses a string-line, curb or previous pass to indicate or control elevation and/or shift. Slope can be controlled by the operator or using a slope sensor. This system is most often used on motor graders.

Laser benchmark – A tripod-mounted laser works with a stick/arm mounted laser receiver as a benchmark reference during operation. This is used to re-bench and indicate accuracy in cuts.

Improved safety and cost-savings – 2D systems reduce the need for grade-checkers and surveyors on the ground near heavy equipment, which creates a safer jobsite environment. Often, when digging a trench for example, it is required to have a grade-checker present on the ground to regularly check that the trench is being dug to spec. A 2D system can easily be benchmarked against ground level, so if a trench is specified at a certain depth below the grade of the land, the operator can easily set the depth of the cut and the system will notify them when the bucket reaches the assigned depth. Then, the machine can back up, benchmark again against the new surface, and the system will continue indicating to the operator when they’ve reached the target depth in the new spot. The operator can repeat this for the entire length of the trench.

Another important factor is the cost-savings associated with 2D systems. Getting the job done right the first time will reduce time on the job, help lower fuel costs, eliminate any kind of re-work, as well as help contractors more accurately predict material expenses. Also, while 2D systems require an initial cash outlay, the cost of the system can be made up in as little as one job, when one considers all of the cost-savings.

Maximize machine utilization and ROI – Getting the right grade the first time not only eliminates the need for costly re-work, it also reduces fuel consumption and machine wear. Consumables, such as bucket teeth, add up on a job – especially when having to go back and do re-work. Utilizing a 2D system will help contractors dig to the plan more accurately, allowing them to more easily predict fuel and consumable costs, maximizing machine utilization and ROI.

This level of accuracy also helps fleet managers who are tasked with managing equipment fleets across multiple concurrent and/or consecutive jobs.

Minimal training time –There is still a very real shortage of skilled and experienced operators in the construction industry. 2D machine guidance and control systems lower the learning curve substantially, and allow even inexperienced operators to produce quality work. Most 2D systems come equipped with a variety of intuitive features such as in-cab color LCD graphic displays, function keys for instant access to important functions, audio tone indicators and easy-to-use calibration functions that allow operators to learn the system and gain proficiency quickly. More versatile 2D systems include a display panel that easily snaps out of a cradle in the cab. This improves security and allows operators to carry it between jobs and equipment; allowing one control panel to operate in various pieces of equipment. Some systems also allow users to store multiple bucket configurations for easy on-site calibration.

Eliminate under-cutting – Under-cutting, or over-digging, can be a financial sinkhole for a site prep operation. If dirt has been dug out below the specified grade, additional materials need to be purchased and hauled in, and the site needs to be re-graded and compacted. The material costs alone are often enough to decimate a contractor’s initial bid, let alone the additional salary, material and machine costs for the re-work. 2D systems reduce the possibility of these costly occurrences, all while ensuring accurate work from the beginning.

Mass excavation – Contractors don’t often connect precision with mass excavation applications – they’re often focused on just moving as much dirt as quickly as possible, and then worrying about the finished grade at a later date. But an excavator equipped with a 2D machine guidance system can allow that operator to dig with full speed and confidence, avoiding over-excavation. By getting the terrain as close to the final grade as possible, it’s going to eliminate having to haul in more material to reach the final specified grade.

Accurate final grade work – Machine guidance and control isn’t just for the big boys. If you think about final grading, especially as you get close to buildings and other obstacles, larger bulldozers and graders can’t often do that type of work. Compact track loaders particularly – which provide significantly lower ground pressure than other machines – can get next to buildings and operate over underground utilities, etc. without disturbing the ground. The agility of these more compact machines compared to their larger counterparts also offers significant productivity and accuracy benefits in tight spaces, especially when equipped with a 2D machine guidance system.

Interchangeability – Many 2D system components are easily interchangeable from machine to machine. As an example, some systems allow operators to easily disconnect and carry the in-cab display panel between sites and separate pieces of equipment. This allows contractors to make a smaller initial investment in hardware, and still receive great results.

It should be noted that some new machines are coming direct with factory integrated machine control, which means the sensors are built into the existing cylinders and hardware. They essentially operate with 2D functionality. These integrated systems can cost a premium, while non-integrated systems are more economical, and currently provide greater versatility as they can easily be moved from one machine to another with minimal work.

Scalability – Some 2D systems are easily scalable to 3D systems as a contractor’s needs grow over time. Many of the sensors, lasers and other basic components of 2D systems are integrated into 3D systems as well, so upgrading to a 3D machine control system is often easier and less costly when the time comes.

Equipment owners and fleet managers should consider their long-term needs and research the scalability of their machine guidance/control systems. Depending on the manufacturer, there may be a lot of consistency in the components used which means less cost to upgrade at a later date, but this can vary based on manufacturer and the type of system used.

Easy adoption – Several equipment manufacturers have partnered with technology companies in order to offer some form of machine control option available from the factory. Specifying machine control options direct from the factory not only saves time and money in the long run—by eliminating the future downtime for installation—it also means its easier and more affordable than ever for contractors to get started.

In addition to eliminating several past barriers to entry for contractors, these partnerships between equipment manufacturers and technology companies also provide advanced system setup, calibration and training through their dealer networks, which helps to ensure that contractors are getting the most out of their investment.

Machine guidance and control technologies are becoming easier to operate and integrate across fleets of all sizes, and with that comes the possibilities for greater productivity and increased ROI. While some still think of it as a technology that’s only suitable for large bulldozers and motor graders, many are starting to see it for what it is—a transformative technology for machines of all sizes that can help contractors, fleet managers and equipment owners get onto their next jobsite with greater efficiency and profitability than ever before.